Mark Kram, Jr. is the author SMOKIN’ JOE: The Life of Joe Frazier and Like Any Normal Day: A Story of Devotion, which was bestowed with the 2013 PEN/ESPN Award for Literary Sports Writing.

His work has appeared in The Best American Sports Writing (Houghton Mifflin) in 2011, 2008, 2005, 2003, 2002 and 1994. The Society of Professional Journalists honored him with the 2011 Sigma Delta Chi Award for feature writing. The Associated Press Sports Editors have awarded him first place prizes for feature writing in 2008 and for explanatory reporting in 2009 and 2010.

His articles have also been recognized by the Pennsylvania Associated Press Managing Editors and the Keystone Press Awards.

He is a former Senior Writer for the Philadelphia Daily News, where he worked from 1987 to 2013. He has also worked at the Detroit Free Press and the Baltimore News American. Additionally, he has contributed book reviews to The New York Times and the "American Read" essay for Business Day Sports Monthly in Cape Town, South Africa. He is also a former contributing writer for Philadelphia Magazine.

Born in Baltimore, Maryland, he is the son of the late Mark Kram, an acclaimed writer for Sports Illustrated and the author of a controversial book on the rivalry between Muhammad Ali and Joe Frazier, Ghosts of Manila. 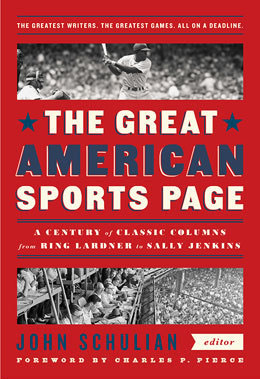 From The Library of America: The Great American Sports Page

The Great American Sports Page collects the work of the finest American newspaper sports writing from the last century. From Ring Lardner to Thomas Boswell, from Red Smith and Jimmy Cannon to Leigh Montville and Sally Jenkins, the book includes a portrait by Mark Kram, Jr. of a boxer haunted by a man he killed in the ring. Edited by John Schulian.

This two-part series explores the life and death of a young boxer, whose transplanted organs saved the lives of five people.

This tells the story of the sudden death of a college football player from MRSA, a variety of staph that is resistant to conventional antibiotics. This illness has increasingly become a problem in the athletic community.

Read about how a young boxer deals with the emotional toll of killing an opponent in the ring.

Find out how a pro football star gave his life to save a young boy from drowning—and how that youth ended up.

Discover the spiritual journey that led a women’s college basketball star to become a cloistered nun, told in part through the letters to her former teammates.